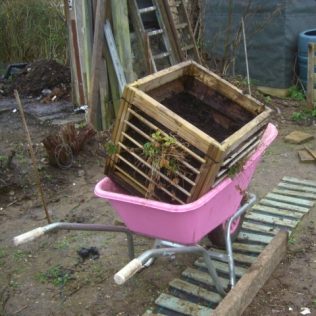 Our experience with growing crops in agricubes was mixed. In favour of the cubes was the ease of assembly and appearance of the cubes – they are certainly nice looking pieces of kit!

Against them was the difficulty we had in getting anything to grow on a north-facing side and the poor yields in root crops.

Overall, the conclusion of the Grow and Tell students was that an agricube would be much more use for those who don’t have allotments than for those with them. We also thought it would be an excellent device for schools and businesses that want to provide some fresh food and the ability to learn basic horticulture but have no space to do so – it was even suggested that agricubes could take the place of bollards in our public spaces!

We did find that the agricube was very useful for one crop though – strawberries! As a result, while one of our agricubes will be going off to another plot, the second will be remaining with us and has been relocated to what will be the centre of our mini-orchard. It will be replanted with flowers that are particularly attractive to bees, and with alpine strawberries, so that it can serve as a ‘bee-hub’ for the five new fruit trees will are planting this year.