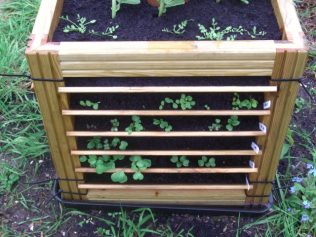 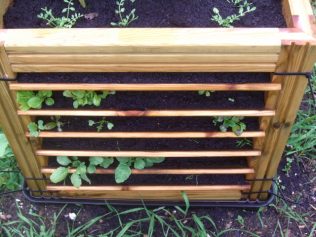 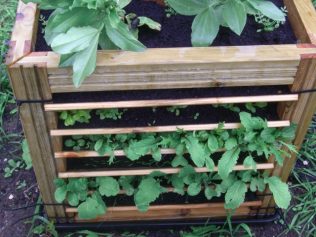 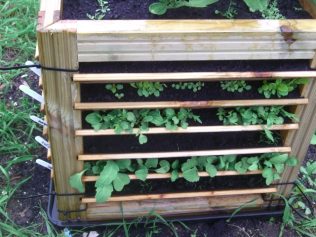 The first of the two agricubes on plot #103 is well established. While we found sowing seeds quite complicated, the germination rates look good. There’s a substantial difference between the performance of the four sides of the cube though.

The north side of the planter has no white Lisbon onions yet (the lowest tier of the planter) and sporadic germination on the other tiers, although the radishes are looking good. It also looks as if some of the seeds from the tier above have been washed down into the one that should contain carrots!

There are a couple of White Lisbon germinating on the east side, and some carrots in the third tier on this side – the radishes look good but the spicy salad leaves don’t seem to be germinating very well.

Germination on the south side is very good indeed – the spicy salad appears to be overshadowing the carrots a bit, but carrots probably won’t mind that, and the radishes are starting to fill and will be harvestable in a few days. What is showing up on the photo of the south side is the effect of prevailing wind – the broad bean seedlings that we planted in the top of the planter, along with limnanthes seeds (to encourage ladybirds that predate on blackfly) are being blown forward by the wind. We haven’t supported them because this is an experimental planting so we’re seeing how the planter copes with a range of conditions, including Weald’s regular gales and the switchback effect of swapping between on-shore and off-shore winds.

There is good germination on the west side, although the carrots seem to be all at one end of the row again and it’s not clear if this is an issue of sowing, something that happened when the planter was watered, or the result of prevailing wind conditions.

The second planter is still empty! It’s going to be filled with perennials, rather than annuals, but with the predicted bad weather, and possible May air frosts, we’ve decided not to plant it up for a couple more weeks. There are cucumber seedlings waiting to go into the top of this planter, and they don’t like even a hint of frost.