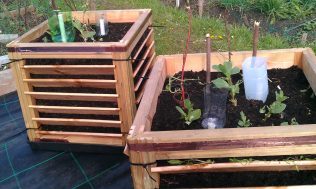 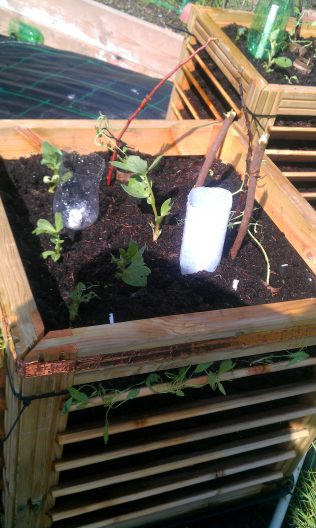 So here it is the second report on my trails and tribulations with the agricube. A recent bout of illness (stupid labrynthitis), rain and recent break away to Dublin meant I had some catching up to do. I looked at Kay’s report and felt a little behind in comparison. A friend of mine said that when I got my plot then I would be plagued by curious elder/experienced gardeners imposing their words of wisdom and pointing out what I was doing wrong. Rather like ‘you don’t wanna do it like that, you wanna  do it like this’ (imitating Enfield and chums)  which would be ok if they pitched in and helped. So far I have only had one comment of  ‘that’ll take some digging love, double digging is the only way forward and you being a woman an all…’ his words trailed off and he had a suck and blow expression on his face, of course I just bit my lip and half smiled. I’m sure he has since eaten his words. I have since encountered two more guys at the plot who have expressed words of encouragement.

I firstly have to report a revision of the watering system and change to a finer organic compost as existing problems with sowing seed through slats meant that it was difficult to place, space them and ensure adequate soil coverage. This change helped a little but I lost some original seeds sowed. I am happy now try raising plug plants in trainers to see if that is any better.  As for watering, I thought I may as well revise dripper method with bottles and attach them with watering spikes to irrigation soaker hoses slightly coiled at an angle. This proved hard to keep in place whilst filling with compost but managed. I also decided to put grit on the bottom trays. I only hope it works.

I placed the agricubes in a sunny position on the plot but scratched my head as to how to get even sun all way round the cubes, I placed them diagonally next to each other in diamonds but then middle of the month had the idea to place them on planter pot movers so I could swivel the cubes around easily to gain maximum sun for all sides of cubes. I now have to scientifically devise a way to ensure equal exposure to the sun when I am working on the plot and when at work, this may prove difficult so may end up being a little haphazard.  I will let you know how easy this is when I have tried it out (very few of my great ideas actually work out in practice but oh how excited I get when I first think of them).

One thing I like about the cubes which I the heavy rain made apparent is that they are manageable in wet weather. The heavy rain fall did mean that I lost a lot of seeds from side slats as they were washed out, I found evidence of this on the weed suppressant fabric next to the cubes. The peas and broad beans I had planted in the top have been badly massacred by slugs so I placed some copper tape round the sides of the cubes to try to combat their hungry attacks. I have replanted more seeds so cross fingers they will take. The heavy winds took its toll on the spinach which was starting to come through nicely and the soil is quick to dry out on the exposed sides too. No sign of growth on west and north facing sides of cube but the pot movers should take care of this. Compared to the beds which are lower and less prone to wind attacks the cubes are not doing as well but plants do not suffer from being suffocated by extensive weed invasion. No hoeing means less hassle.