You are here: HomenextNew contributionsnextViper's Bugloss : A Treasure Trove to Share 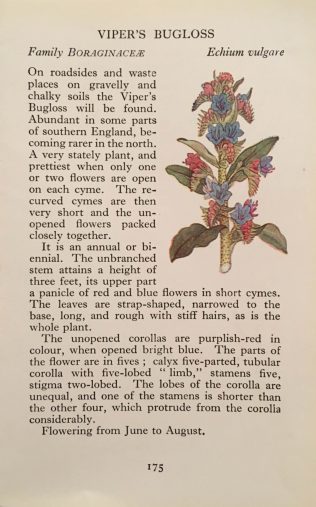 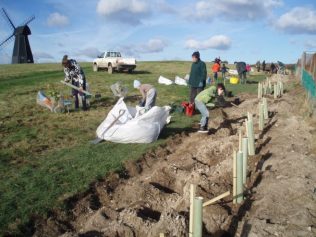 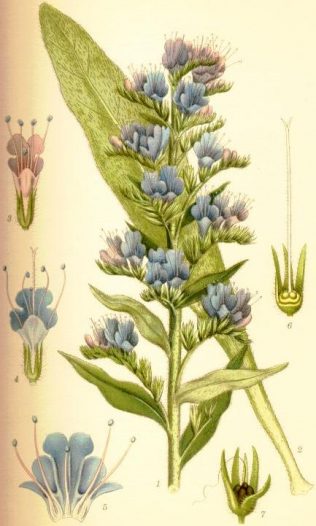 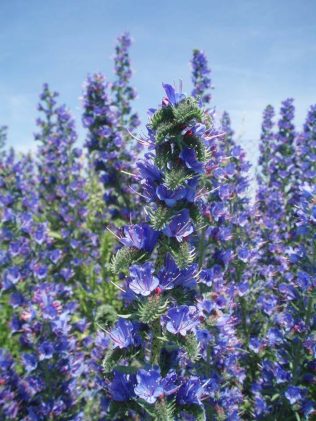 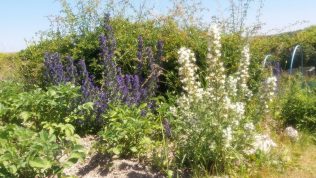 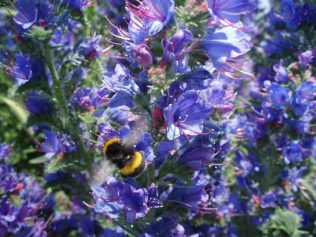 As a child, a particular species of flowering plant in my mother’s precious copy of The Observer’s Book of Wildflowers stood out from its colour plate on page 175. Echium vulgare, or Viper’s Bugloss. My glee at seeing my first ever real-life Viper’s Bugloss in flower, over a decade ago, on the coast road verge on the way to my allotment garden, was soon shattered as I found it strimmed by someone ‘tidying up’. Undeterred, I salvaged the decapitated flower spike, which had already begun to set. The seeds germinated successfully, and the resultant plants produced superb flowers two years later. Echium vulgare is biennial, but can sometimes flower in one year if you are lucky.

In 2008, after the planting of a mixed native species hedgerow on the perimeter of the allotments at Windmill Hill and the adjacent Beacon Hill Local Nature Reserve, I did a bit of guerrilla gardening amongst the hedge whips; scattering seeds collected from those second-year flowers. Little did I know at the time, but each seed ‘pie’ contains four seeds (see the botanical illustration), so I effectively scattered four times as many seeds as I intended. Two years later, the herbaceous border of stately blue-purple flower spikes was spectacular. The photo shows the architectural stems, well over three feet tall.

The hedgerow has struggled against the salt-laden sea gales and three acts of vandalism, but further along it in the lee of the maritime impact it is doing better. The Viper’s Bugloss however, is a constant annual treat within my allotment garden, as it self-seeds. I have a lovely pure white or leucistic variety too, the seeds of which I’ve saved separately to see if the trait is passed on. See the photo showing the blue, and white varieties side by side this summer, next to potatoes and a baby Hawthorn hedge.

Viper’s Bugloss is a plant which provides an incredibly long flowering period (as I write this, in November, a plant in a friend’s garden still has one blue floret hanging on against all odds). Its spiky rough leaves and stem mean that slugs and snails give it a wide berth, so it’s a great alternative to a mollusc’s favourite dinner; Delphinium. When in flower, Viper’s Bugloss provides sustenance for insects including many species of endangered bumble bees. The photo shows a Bombus lucorum taking advantage of nectar and pollen.

In 2016 a new species of bee in Britain, Hopilitis adunca was found breeding in Greenwich Peninsula Ecology Park. With a nod to its preferred flower, it was given the common name Viper’s Bugloss Mason Bee.

The Natural History Museum article on this can be found here: http://www.nhm.ac.uk/press-office/press-releases/buzz-for-new-bee-found-in-greenwich.html

Viper’s Bugloss is a plant that keeps on giving. This summer I filmed Small Elephant Hawk moths doing an aerial ballet whilst feeding on its nectar in the dimpsy dark. Silver-Y moths also partook of the Bugloss banquet.

I’ve been gardening at Windmill Hill for over eighteen years now and I find that gardening with the LNR in mind and benefitting from wildlife is really useful. To the untrained eye, in its first year before flowering, Viper’s Bugloss can resemble Bristly Ox-Tongue, which I do not cultivate and pull up as a weed. Viper’s Bugloss certainly doesn’t seem much to look at during its first year, but patiently allowing those leaves to flourish in places where the flowers are wanted gives great rewards the following year. I save seeds to give to friends, and for multifactorial reasons, it’s a wonderful wildflower which warrants promotion as garden gem.