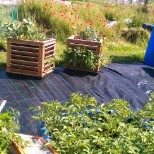 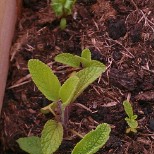 Beans, spinach and sweetcorn  have saved the day  in the cubes and on in the beds and made me feel that all my efforts to beat the weather and little vegetable predators are not totally in vain.

Oh my oh my, all the fun of gardening in rainwear and relocating slugs from allotment to a far away place in big buckets got a little boring and frustrating. Good news is the cubes were not as waterlogged as the rest of the lotty. Bad news the rain and wind took its toll on the herbs and then there was the wind.

A few breaks in the bad weather here and there meant good news for my state of mind being able to sow in between the slats again after re fertilising. So I started to sow some more spinach, winter lettuces and rocket. I harvested some carrots and beetroots which were very small but tasty and perfectly formed. The scorzonera was ready but did not do so well with these I got 3 roots and they were quite spindly.

Mid month I sowed some mizuna, mibuna and planted some cos lettuces endives and little gem plugs I had grown from seed indoors. I am praying these do ok. I have never grown these and hope they do better in the cubes than the ones I have mirror planted in the beds nearby.

I bought some organic safe slug repellent pellets I am assured by the info on the website is safe for wildlife and the soil and used in all large scale organic farming. I admit I am desperate to recoup some of my losses and retain something green to eat over the autumn and winter. Let’s see how it all works out as even the copper tape around the cubes is no match for the tenacity of the local slug and snail population.

This year really has been a massive learning curve and I confess I have neglected the cubes somewhat in favour of the constant need to look after the fruit and vegetables in my beds and constantly weed, mow and strim my paths. My sense of humour has sadly not returned but my perseverance has remained steadfast.