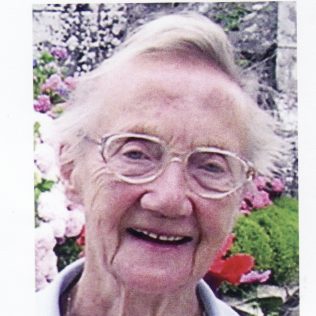 Pamela (known to many as Pam) died on the 12th on May aged 87 years an age that belied her tireless energy and helpfulness to people and groups of which there were many. However most treasured and first in her priority was her family.

Pam and her family.
Pam was born in Grantham in 1922 into a family with a strong caring and helping culture. Her mother always had some refreshment for marching groups such as the ‘Yarrow Marchers’ walking to London to air their grievances to parliament. Pam did well at school and went to the Grantham High Schools for Girls. Her mother’s dictum to her was to look after the younger girls. One of these she took to school daily a ‘bossy little girl called Margaret Roberts’ Both in their time went on to be School Head Girl and Margaret Roberts to be Prime Minister.

While teaching in Southend she met Arthur her first husband a greengrocer and fireman. Later in 1968 they moved to Brighton to take over the sub post office at Terminus Road which Pam ran for 24 years and was awarded the BEM for ‘Services to the Postal Service’.

Arthur died suddenly while they were both on the floor dancing at the Metropole Hoteleaving her with a young son Christopher A little later she met Fred a widower with three young children while both families were on holiday in Paris. They subsequently, married, joined the children into one family and continued to run the post office and shop until retirement in 1982.

Pam always spoke warmly about the exploits of her family with a glint in her eye and a big smile  such  accounts of how she and Fred went to Thailand for the winter for years even when Fred was blind or another her own trips to Paris, a city she loved with her grandson in later years.

They took their first Allotment at Tenantry Down Site on retirement

Tenantry Down Allotment.
This was her site with its splendid views of the City and the Sea. Although Fred was partially sighted bt the he still managed to do all the digging and manuring. They entered with credit in the Coronation Bowl.  Pam was a long time member of the Site society and held every office on the committee and from about 1980 was an active Site Representative to the Federation. Pam was famous for quietly helping many new gardeners once they started with  little previous experience of the annual growing cycle and soil cultivation.  An active Society member she held most offices on the committee as well as acting as a model Site Representative. Pam and Fred revived the Site Distribution Hut and started limited trading however vandals burnt it down one weekend and although rebuilt after break-ins and other vandalism it closed. After giving up her own plot Pam continued allotment gardening helping her son on Horsdean Site and at the Bhogg Allotment on the Weald.

After giving up in 2003 Pam went back one day by bus. Found some things of hers and her wheelbarrow. She thought they were worth keeping and walker her barrow down the hill and up to near the Old Children’s Hospital Dyke Road where she lived. Fred died in 2003 and this started another love of Pam’s her work with St Michaels and the Angels.

Allotment Federation
Pam was Site Rep (SR) for Tenantry Down and an active member of the Federation serving on the committee for many years. Her dependability and constancy was clear in many unobtrusive ways such as organising a welcoming cup of tea at quarterly meetings and enveloping the newsletters at the Town Hall for despatch to members.  Also when the Federation and the Council did a survey of what allotment holders thought about their site thanks to Pam her Site had the highest average return. Again when the Federation did a survey through SR’s on the problems and issues on all sites Pam went around and asked other Tenants what they thought.  When the Federation decided to test the support for a revival of the B,H,& Lewes Organic Society Pam was a keen supporter and founder member. Pam was elected as an Honorary Vice President of the Federation in recognition of the many years of valued service.

BHOGG ( Brighton and Hove Organic Gardening Group)
Pam was a member of the steering Group set up by the Federation to revive the Group and an active member of the committee. A regular attender and participant in the Annual Monthly Activities and meetings. until latterly she was unanimously elected President. Her support for the Organic Allotment at the Weald Site was consistent over the years especially on Open days not only on the day itself but in the preceding weeks when extra work was needed to make it look good.

St Michael and the Angels church (Hove)
No tribute to Pam would be complete without a warm mention of another of her great loves. A Church Helper for many years doing the chores inside the Church. She volunteered for the rota of helpers who supervised the Church during opening hours to combat vandalism and also to give visitors the opportunity to see one of the City’s most famous Churches and especially the nationally famous beautiful stained glass windows designed by a member of the 20th Century Bloomsbury Group. At the Annual Lecture Pam would not only be present at the well known cream teas but invariably baked the 100+ cakes in her own small kitchen at home.

AMICA – Raising money for charitable purposes.
A much lesser known side of Pam’s activities was her membership of Amica and it’s predecessor. Amica is a group of Ladies who run jumble sales and functions to raise money and then distributes it in reasonable amounts. On two occasions thanks to Pam’s introduction and help they made two sizeable grants to the Special Needs Allotments at Foredown site.

The Allotments in Brighton and Hove recognise the debt of gratitude due to Pam for her untiring energy and special helpfulness in the Development of Our Allotments as they are today. One comment in the BHOGG newsletter tribute sums Pam up to the effect that ‘If Pam was a flower she was one of the finest perennials in our midst’.

In 2006 Pam was interviewed by My Brighton and Hove website about her plot – read her story here.