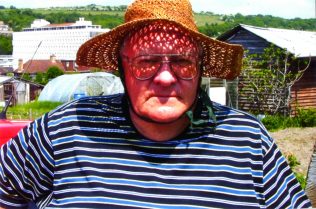 John Allam, longtime chair of Moulsecoomb Estate Allotment Site’s society, site rep., stalwart of the site shop, and friend to many plot-holders, died quietly at home in the early morning of 18th June 2014 after a long illness, aged 67.

John was born in Brighton on 11th January 1947. He worked on Brighton railway station from the age of 15 years, and later as “station boy” at London Road station. His general duties there included sorting the cinders from the fireboxes of steam locomotives in the siding, so that reusable coals went back in the engine, cinders were used to   grit the platforms and footbridge in icy weather, and the soot was sifted out for the allotment gardens, cultivated by railway employees, on the north and south sides of the station, where the sulphur in it kept the onions free from “mouldy-nose” (white rot).  Later he was a bus-driver, and later still set up his own painting and decorating business, with five employees. He had several allotments of his own during his gardening life and moved to Moulsecoomb from Tenantry Down site. He was an enthusiastic gardener, loved bringing home vegetables for the family, but always believed that it should remain a pleasure rather than a chore; as he said, when anyone seemed in danger of taking things too seriously: “Remember, it’s a hobby,not a job!”

John was one of a band of long-standing volunteers on the committee who revived and sustained Moulsecoomb allotment society and shop through the 1990s and early 2000s, a time when allotment gardening had briefly fallen out of fashion; Alan Banks (shop manager for many years), Brian Ellis (seeds), Audrey (treasurer) and Norrie Norman, Lenny Johnson, Sean Howes (machinery maintenance) and Roy Hubbard are some of the names that come to mind. The continuation of this valuable tradition is due to their hard work over nearly two decades, until they handed it on to a new committee. In 2012 John was elected President of Brighton and Hove Allotment Federation.

The shop had become a centre for meetings, informal discussion and socialising where anything from potatoes to politics was debated, potatoes being one of John’s favourite crops. He was a true connoisseur of the spud. My last conversation with him over the phone, when he was confined to his bed and on oxygen, was about the relative merits of first early varieties (he recommended “Concord”, which appears not to be available from seed merchants any longer). Even during his terminal illness, John was devoid of self-pity. “Self-inflicted!” he would announce, when referring to his chronic pulmonary disease. He was generous with his time and effort, and donated valuable equipment to the shop for society use. He was forthright in his opinions but ready to respect an opposing point of view. He had no time for elitism and vigorously championed at the federation the interests of gardeners on low incomes. His good humour was as unfailing as his courage in the face of his inevitably imminent death. His wicked giggle will be remembered, and missed, by all who used the allotment society shop.

John was married for very nearly 49 years to Pam, his devoted wife and carer, who was constantly at his side during the last 2 years of his life. They shared their home with a growing collection of lovely cats who somehow knew that they would find a kindly welcome. He is survived by Pam, their children and grandchildren.