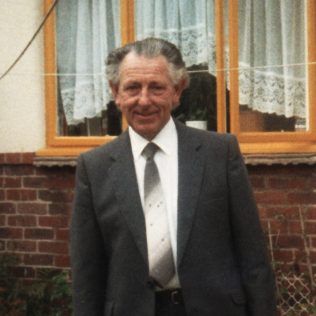 Harry the first President of the Federation died on 18th July just one month short of his eighty ninth birthday.

Harry, himself, a quality gardener became active in the promotion and development of Allotments during the war. As a vital Allan West employee using his skills to make war equipment, he was in a reserved occupation during the war

Harry lived and gardened in Portsade where there were both permanent and temporary sites to maximise home grown produce. The Council (later amalgamated with Hove Borough Council) needed help with site managemwent and tenants, many new to soil cultivation and the vegetable growing cycle also needed help and guidance. Harry assisted both and became trusted by the Council and respected by tenants and known known to all as ‘Mr Gander’.

Later as Temporary sites closed Harry was active to keep Statutary sites even though demand was dropping.

His interest continued into the wider area of Hove Borough where the Allotments Committee made up of Councillors and Allotment Holders was continued after the statuary requirement for Councils to have one was abolished. The principal business at this time was a rationalisation of sites following the drop in demand in the fifties and the pressure for Housing and Hospital Land.

Harry was a life member and very much involved in the discussions that went on about the ‘Future of Allotments’ following the Thorpe report in 1950’s. He regularly attended National Conferences 4/5 days of debates and discussions) going all over the country in his caravan with his wife Winnie. Consequently he was well acquainted with Allotment Legislation and Law that he applied for the rest of his active time with Allotments locally. Two cases are worth mentioning.

Harry, Bill Wakenham SR, and the Fed Sec met managers of the Allotments who could not produce a copy of the report and were using the 1937 site map. After a lot of discussions the Council were told that the development required Secretary of State Approval, Planning permission from Adur District Council and the Federation would formally oppose and applications. After many more discussion and compromises and thanks to the Ste Reps stubborn insistence a line was drawn to allow development of the Old Shoram Road frontage, a planning gain proposal would provide a long overdue fence along the boundary with a public footpath the other side and a site hut with toilets. A site Society was formed and they continued the discussions but to date nothing has been settled for Council Decision.

The Sussex Gas Pipeline plan set aside an amount of money for environmental projects within the shadow of the route. The Council Countryside Manager commissioned a report from an agency based in Worthing to develop the site which would be handed over to the South Downs Conservation Board.

Harry kept telling the Federation that this was a Statuary site and could not be gifted or leased for other purposes without Sec of States Approval. The Council’s Solicitor refused to accept its statutary status and there was a ‘ spend the cash before the following 1st April or lose it’ urgency. With the help of another experienced  member from the Weald Site. Bill Bardsley. a personal search was made of old records in the archives of The former Hove Borough Council Allotments Consultative committee and they found the Council Minute that recorded the ‘Acquisition of the Foredown Site to replace a Statuary site else where in Hove that was needed for Housing’ and clearly stated that the site was ‘purchased specifically for allotments’. The Federation then supported the application with a plan that retained the site as it exists now for allotment purposes and included some reserve land that is now coming into use. Permission normally took up to six months but with the BHFA’s help it was obtained in express time of three weeks,

The Allotment Holders of Brighton and Hove owe a debt of gratitude to Harry for a lifetime of voluntary work for the good of allotments.