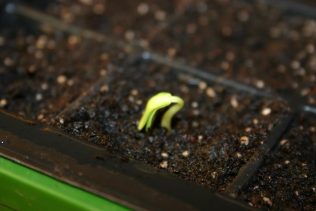 A hardy annual is a plant with a life cycle of one year that will tolerate the frost and can be sown, without heat and will be fine to leave outside, preferably with some shelter. Some examples of these would be Nigella and Cornflowers. You can sow them in SeptemberOctober or from now until March time for lots of cut flowers.  They are best grown in modules to avoid root disturbance.  These hardy annuals include sweet peas.

Some vegetables have some hardy varieties that are o.k outside in the cold weather – I have just picked some salad leaves, mizuna, mibuna, giant red mustard and pak choi that have been growing in the veg pot quite happily, unprotected, during all this cold weather.  You can also get hardy broad beans, Aqua Dulce Claudia and onion sets, that will be fine outside during the winter. There are also lettuces that do well outside. The following all survive in Brighton, if you live somewhere cooler and wetter, try these in pots or window boxes sheltered against your shed or grown in a greenhouse if you have one. Try ‘Green Oak Leaf’. If you pick it carefully, just harvesting a few outside leaves at a time, this will crop a little from six to eight weeks from sowing, right through the winter. Then, as spring begins, it really pushes out a ton of leaves from early March until at least the end of April. The same applies to the red-coloured ‘Cocarde’ which being red also keeps off the slugs and snails, for some reason they don’t seem to be attracted to red veg. For a crunchy lettuce, add the American variety, ‘Black Seeded Simpson’, surprisingly hardy with a lovely texture and taste and also the soft, rounded, famously winter-hardy lettuce ‘Valdor’.

These should keep you in salads through the winter.

Then we have the half hardy annuals – these are things that will not tolerate the frost and need heat to germinate – around 20ºc, their life cycle, like the hardy annuals, is just one year from germination to dying. (That is their life cycle in our climate, it may be different depending on where they originate from and sometimes we grow plants that are perennial as annuals, or eat the biennials, eg; carrots and parsnips, before they flower).  That would include things like tomatoes, chillies, aubergines, peppers, runner beans, courgettes, sweet corn, and many of the brassicas, cabbage, Brussels sprouts, broccoli etc.  There are also flowers, often used in containers or bedding such as Petunias, Impatiens, Lobelia.

The important thing is timing – some things, for example, chillies and Petunias need a really long growing season and so it is a good idea, if you have a propagator, to sow them now.  This will allow plenty of time for them to mature and you will be more likely to get good fruiting and flowering in the summer as they will have had maximum time to receive as much light and heat as possible. Other things, like sweet corn and courgettes, germinate and grow quickly, as do runner beans so leave those and sow them later on in March or April.  They won’t be safe to plant outside until danger of frost has passed, around mid May in this part of the country, and so if you sow them too soon you will have a kitchen full of runner beans with nowhere to put them!  The chillies and aubergines and other slow growing things, that you are sowing now will need to be kept somewhere frost free until mid May to – so bear that in mind and don’t sow too many seeds! Planning is vitally important – be realistic about what you can manage – allowing for a few failures and some to give away.