What to do in February 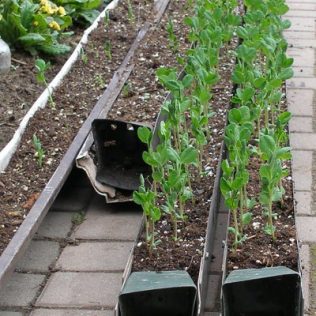 Plant shallots if the weather is mild and the soil is dry enough to dig and rake over.  You plant them just below the surface about 20cm (8”) apart.  You can do this job in March if the soil conditions are not good enough.

Prepare for sowing early varieties of radish, carrot and turnip; pick the ones that are described as suitable for forcing.  You can fork and rake the ground over and then cover it with a sheet of polythene or a cloche and leave it for four weeks – this will warm up the soil reading for sowing.  In four weeks time hopefully the weather will have improved!  When there is a fine day uncover the ground and sow your seeds in shallow drills.  You can make drills using the handle of a rake and press it into the ground or use a draw hoe to draw out a shallow drill.  Make sure you water the seedlings and then cover them over with horticultural fleece, holding the edges down with some stones to stop it from blowing away. A single layer is enough to give a few degrees worth of insulation from cold.

If you can get hold of some spring cabbage seedlings, now is a good time to plant them.  They are usually sown in July or August and often put out into the beds in early autumn.  The garden centres will have some for sale now, although they are unlikely to make such big hearts as the earlier ones it is still worth planting them out 25 – 30cm (10” to 12”) apart in rows 45 cm (18”) apart.

Sow parsnips if the weather is good; they need a long steady growing season.  If the ground is still frozen then wait for another two or three weeks or the seeds will rot away.  Scatter the seeds, as thinly as possible, in drills 2.5cm (1”deep) and about 38cm (15” apart).  They will need to be thinned out to about 23cm ( 9”) apart eventually, I usually sow some radishes along side them as they are slow to germinate and this helps to give a marker as to where the parsnips are growing.

Now is a good time to start off peas, choose a variety such as Foremost or Meteor which are very hardy.  Sow them in guttering away from the mice or soak the seeds in maxicrop which is a seedweed fertiliser – this should put them off nibbling your seeds.  You can also lay holly leaves on top to keep them off.  It is best to start them off in guttering as then you can slide them into a trench once they have germinated when the weather is a bit warmer.

If you had dahlias on your allotment last year and you overwintered them in a frost free place, now is a good time to bring them out and put them into boxes, or you can use pots.  They need a temperature of 13º to get them going and then you can take cuttings of the soft young shoots.  The root tuber of the dahlia should just be just below the surface of the pot.  When the shoots are about 10cm (4”) tall,  take a knife and cut the stems just below a leaf joint – this can then be potted up into some gritty compost and put in the propagator.

If you have a polytunnel or green house you can use it for growing very early crops that spend their whole life under cover.  You could do this with baby beetroot, or carrots and also a crop of French beans.  If you are going to be using the area for tomatoes, aubergines or peppers make sure you leave enough room for them as the beans, carrots and beetroot will occupy the ground until June or July.  If that is the case then just show some radishes or spinach in the greenhouse or polytunnel now and they will have been eaten before it is planting time for the tomatoes.

Spinach that can be sown now doesn’t need to be thinned – you can just pick the baby leaves for salads.

Later in the month you can sow lettuce, leeks, onions and early brassicas such as summer cabbages and cauliflowers – they need about 10-15c (50 – 60 F) to germinate – so need a cool propagator.

If you have things in containers it is a good idea to top dress them now with fresh compost and grit to keep the weeds down.

If you have bush and cane fruit give them a feed with pelleted chicken manure to give them a good start.

If you have strawberries it is a good idea to cover then with horticultural fleece as this will protect them from the wind and cold and will encourage them to flower and consequently fruit earlier than usual.  Make sure you water them and as soon as the first flowers appear uncover them so that the bees can pollinate them.

There is still time to plant bar-rooted fruit bushes and a good time to plant autumn raspberries.  These are good as they only grow to just over a metre and don’t need staking.  Just dig a trench and add lots of manure or compost and plant the canes 30cm (1ft) apart, in rows 60cm (2ft) apart.  The best way to get a straight line is to use a line, (two canes with string taut inbetween).