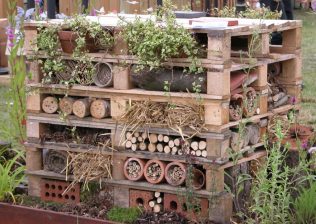 Making a wildlife hotel is a really good activity to do with children during the holiday period.  Find some old pallets and stack them on top of each other or use some old vegetable crates.  You can then fill them with things such as dead wood, which is essential for the larvae of wood-boring beetles such as the stag beetles.  It also supports lots of fungi which help to break down the woody material.  Crevices under the bark hide small invertebrates.

You can collect hollow stems which make homes for the many different species of solitary bees, which are all excellent pollinators.  The female lays an egg on top of a mass of pollen at the end of a hollow tube, she then seals this with a plug of mud.  Consequently bamboo canes or holes drilled into blocks of wood, make a good nest site for solitary bees.

You can also add rolled up corrugated cardboard for lacewings, strawand hay for invertebrates to burrow in and loose bark pieces and small twigs for beetles, centipedes, spiders and woodlice.

If you have a pond you may see clouds of small flying insects emerging in August.  They are midges which draw in highly efficient predators such as dragonflies which patrol close to the water surface and nap up many midges.  They may also encourage pipistrelle bats at night which are also pollinators.