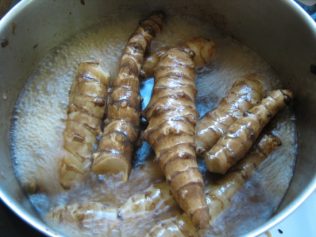 Another delicious and easy soup can be made from jerusalem artichokes, but a little forethought is needed – don’t have it for lunch if you’re planning an evening out! Jerusalem artichokes contain a form of sugar called inulin (not to be confused with insulin) which we cannot digest, and which ferments in the gut with rather windy consequences!

Fry the onion till soft. Add the jerusalem artichokes and stock. Bring to the boil and simmer for 20 minutes of so until the artichokes are soft.

Liquidise. Add the cheese and cream (if using), then cayenne to taste.

If I have a glut of jerusalem artichokes I simmer them in a small amount of stock, then freeze after liquidising. this keeps the volume down if your freezer is stuffed to the gunnellls! Just add more water after defrosting to bring the soup to the consistency you prefer, then add the cheese, cream and cayenne.

Incidentally, I have dug two of my plants (it’s now mid Jan 2013) and the crop had been pretty poor – no tubers at all from one, and about 1lb from the other. Each year I only replant four (though a few always escape) so I’m hoping the other two plants have done a little better.

Usually we have more than we know what to do with, and I expected a bumper crop this year after all the rain, but perhaps they need a lot more sun than we had last summer.