You are here: HomenextYour storiesnextAbout you and your plotnextNew Plot Holder advice from Andrew Harris 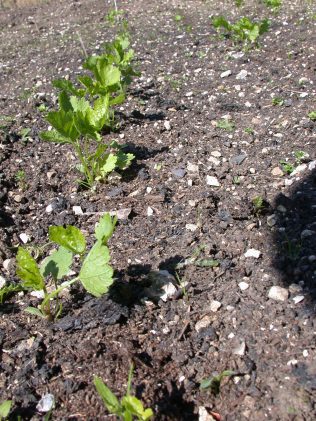 It seems to me that a lot of people get a plot and then give it up in the first year, so I’ve written a brief guide as to how I started. This is not written as a directive, merely a guide to make getting started easier.

I got my plot in October 2009. It was very, very overgrown and literally full of brambles, bindweed, cow parsley and all manner of sturdy perennial weeds. It had not been cultivated for nearly 10 years and during that time the weeds had taken most of the goodness out of the soil.

1) STRIM – With any luck, you will now have a plot that it mostly weed-free but is now full of dead weeds. At this point I would recommend giving it a strim, if necessary, so that you can see what’s what. N.B. Do not strim any brambles. Leave the stalks of the brambles sticking out of the ground so that you can see where the brambles are and hence where they need digging out. Brambles are very resistance to weedkiller so don’t bother. I found that even after many sprays, they still emerged the following year; so do dig them out.

2) DIG – Dig out the worst of the weeds. Cow parsley also seems fairly resistant to weedkiller so dig it out. If the ground is hard and it probably will be, using a fork is the most efficient tool. It breaks up the soil.

3) DIG AGAIN – Get that fork out again and dig over the whole plot. You can skip this step but at some point you have to dig. I didn’t dig the first year but did dig it the following year as I was putting the crops in. When digging, dig short rows, so go width ways across the plot. Psychologically it breaks up an onerous task into something more manageable. You get a sense of achievement as each row is done. I reckon to dig a standard plot would take about 3-4 working days of 8 hours.

4) MANURE – This is the most important bit. Get plenty of manure delivered. For a standard plot, you’ll need two tractor loads of manure at £40 per load. I get mine from a farm in Ditchling (Phone: 01273 843235). It is mixed manure of pig, cattle and horse. Don’t baulk at the thought of £80 as it will save a lot of time and effort in the long run. Spread manure thickly on top of soil. Spread it so it covers the soil to a depth of at least 4 inches. The manure has several functions:  (a) it feeds the soil and hence the plants; (b) it attracts worms who do much of the breaking up of the soil for you; (c) it acts as a superb mulch by protecting and warming the soil; (d) it stops many weeds that are smothered by a heavy blanket of manure from emerging; also, (e) most importantly it stops the soil from drying out. The last few years it has barely rained from March to May when many crops are just starting off. I can honestly say that apart from watering in, on planting; I do not water my crops and do not need to because of that heavy mulch. So do spend that £80 and you will be richly rewarded, I hope.

5) COVER – If you can, buy a roll of weed-suppressing membrane. I got mine from plantsandmoredirect.co.uk. It’s about £100 but will last for many years. Place this over the manure and weight down with many bricks etc or the winter winds will take it. This step is not vital as the manure is effectively acting as weed-suppressor. Alternatively you could put down your fabric as step 1, obviously a more organic approach, as a way of avoiding using weedkiller. However some of the more hardy perennial weeds may lurk underneath the fabric waiting to appear when the fabric is removed. Also for the “cover method” to be truly effective, it should remain in place for a year. Now that new plot holders have restrictions on when they have to make the plot cultivable, it may not be a suitable method.

1) Buy good quality tools. You will need a spade, a fork, a rake and I’d recommend a double-sided hoe or as it’s also called a push/pull weeder. The latter is the tool that I use the most. It quickly and easily uproots or chops the head off most weeds. Look out for second-hand tools which are often very good quality having survived to this point intact and often very cheap. Have a look in the YMCA Shop at the tip on Old Shoreham Road or in Emmaus in Portslade.

2) Consider whether you need to buy a strimmer. They are about £100 but will save you alot of work in the long run.

4) Order your seeds through the shop at Lower Roedale, they are very much cheaper than in garden centres. Poundstretcher on London Road also has cheap seeds.

5) Save your own seeds for the following year. Very easy to do.

6) I don’t dig the manure in. I leave it on top and let the worms and elements do their work on breaking it down.

7) A heavy layer of manure lasts easily a year. I’d recommend though topping up the following years with just one load.