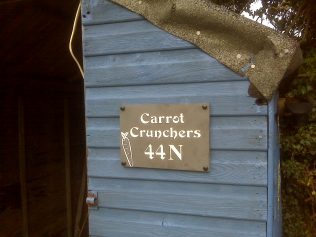 We wanted to rent an allotment in previous seasons but found the lists long and closed.

This adventure all started when the Allotment lists re-opened in March 09. A quick application to the St Louis Site and a few month further waiting. Then came the call from Allotment Al, we had come to the top of the list and some plots had been made available!

I visited the site with my kids, and we took on plot 44N (as only half plots are now available, which is a shame , but will reduce the waiting). It did not look good, the weeds and grass were over waist height and the ground was very hard. Knowing the situation with the waiting lists, thought myself lucky to be actually looking at our own little plot.

The council strimmed all the plots that had been recently let and we started planning the course of action for the coming weeks. Hit it hard, we thought, go for the big bang approach whilst we still have the weather and light evenings. During this time, making a few friends when meeting the adjoining new and existing plot holders. Quite a few of us in a group are new to the site and complete novices too, so lots to learn for the hardened allotmenters!

We took the hard manual option and the initial digging was hard going, but rewarding when broken down into small chunks. Wow we took out a lot of roots and rubbish from the ground, we now have a compost heap too.

I had a few plants at home, so they were put in very late in the season, so hopefully we will have something to show for our efforts, even if they are ruined by the weather (but so far so good!!).

Now into mid November, we have met all the adjoining allotment holders, erected the nerve centre of the plot (being the shed, marked with our site number and name, the carrot crunchers on a sexy little slate plate) and started putting in our grape vine wires and a few other bits in preparation for the spring.

So far so good, there are some lovely people up on our site (as there are on them all I would expect) that are willing to pop over for a chat and give advice and encouragement. I think they are pleased to see areas of the site that were previously very overgrown, now being worked on and cared for.

If you are on the St Louis site, pop over and see us………