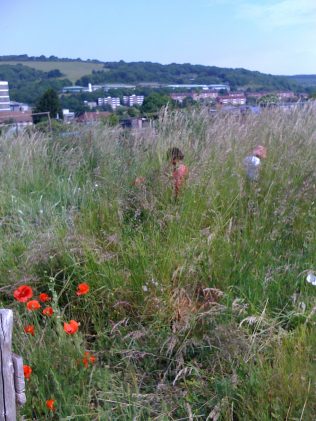 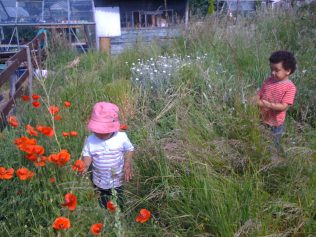 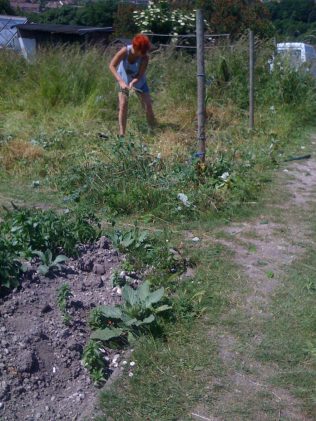 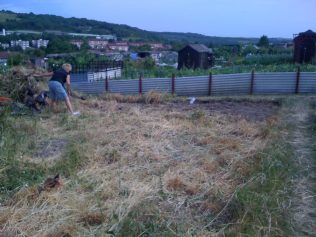 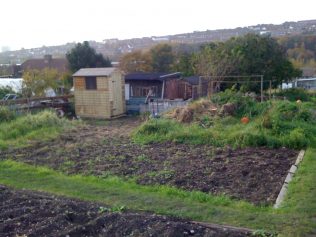 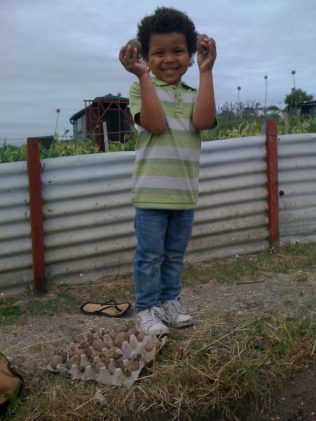 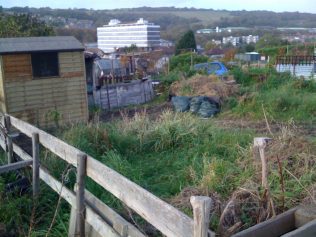 zoom
january 2011 - you see that corner over there? 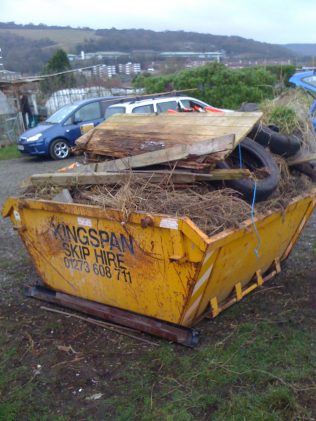 zoom
january 2011 - that filled this skip 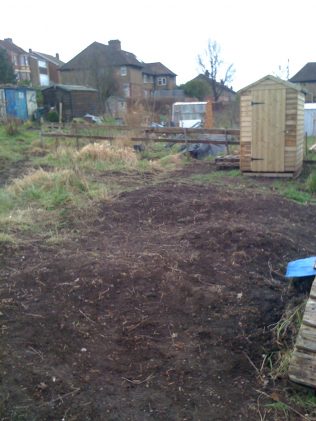 I love my half plot even though it scares me a little. I’ve only ever grown flowers and vegetables in containers on our verandah which isn’t really a verandah at all but the name I’ve given our little outdoor space on the roof of the downstairs toilet (we live in a maisonette).

My childhood is full of memories of gooseberry bushes, apple trees and vines in my great grandparent’s garden, a corner of rhubarb and a massive stinking grass heap at my nan’s that my brother and I used to climb up and throw at each other, and helping dig potatoes up with my dad. I remember him telling me that his dad used to keep pigs on the allotment he used to have.

And so to the Moulsecoomb site. At the end of July when John initially showed me the plot that was to be mine I was unfazed. It looked manageable even though the grass was taller than me! I’ve 2 little boys who whooped and thought it a massive adventure, especially when they found the strawberries. They really do love it up there – exploring what paths lead where, spotting random gloves and the odd mannequin’s head, whilst wondering at all the hanging cd’s (already outdated technology to a 3 and 4 year old!). Needless to say I took it on and I’ve spent the summer clearing it. My half plot seems massive now it’s bare. In the autumn I allowed myself a little luxury in the form of a shed that I’ve named Betti (after my lovely nan). She’ll be painted a gorgeous colour come spring. Caleb and I grew a few potatoes in the little space I had cleared and we tasted our first harvest. I neglected the plot over the winter and admitted defeat when I revisited in January, paying a man to clear the last corner which had been bogged down with carpet and all sorts for god knows how many years. He cleared a skip full, and I mean FULL, of rubbish.

Spurred on but feeling scared at the amount of space i had newly acquired, I attended an introduction to growing your own vegetables at Moulsecoomb forest garden and wildlife project last month. An absolutely gorgeous morning which turned to drizzle by lunch of course, in which I learnt so much from Warren (a brilliant tutor). I’m digging, preparing the soil and planning beds at the moment. I’ve a Moleskine that I’m drawing diagrams and making notes in. This could make it appear (to the untrained eye) that I know exactly what I’m doing. I’ve seed catalogues that I’m marking. I *almost* feel like a proper gardener.

I’ve not been at the site for a year yet but I’m hooked already. I love how it looks and smells after rain, I enjoy working the early mornings in the summer before it gets too hot, and the people – I love that everyone’s there doing their own thing but are somehow bound by the whole spirit of it all. Some talk, some wave, some give me advice that others contradict and I get even more confused. One lady walks past and stops and looks. She either shakes her head if she thinks that I’m doing something wrong or nods if she approves. And I haven’t even grown anything of note yet.

I’ll post some more once I’ve progressed but if I do really badly, don’t succeed at growing anything and that lady shakes her head you may not hear from me again. Really looking forward to reading some other allotment tales and hopefully meeting some of you up there!