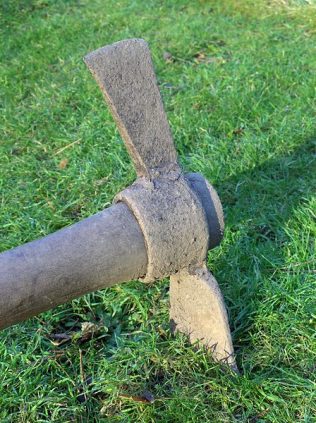 If you’ve just taken on a plot, or even if you’ve had it for a while, and are facing some monster brambles, I have a suggestion for you.

I write from some considerable experience – half of my (full-size) plot was covered with brambles when I got it. Digging them out is back-breaking work (though quite satisfying), and I found they just ate several long-handled tools, spades and forks, which cracked under the strain. Three broke at the neck, and one handle got cracked.

Then I discovered the pick-axe or its close relative the mattock.

Now this is a slightly scary tool, and needs to be used with great caution and with no-one near you, particularly not children, and with sturdy boots on your feet – but it makes digging out bramble roots so much easier! It’s very heavy so needs a good strong person to wield it, but once you’ve lifted it up, as it comes down, its weight takes the blade under the roots, then you’re in just the right place to lever the root-mass up, without the back-breaking digging movement.

We got ours from a second hand tool shop, but I also saw pick-axes and mattocks in B and Q last week, in the gardening section, for around £22.