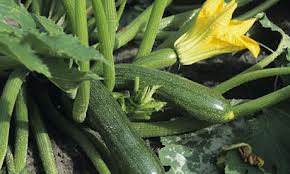 If you’re thinking of planting courgettes this spring, and I’m sure many of us are, then have a read of my cautionary tale – though don’t let it put you off, I think it’s quite a rare occurrence judging from the doctors’ reaction.

I had been baffled by several of my meals being ruined by an awful, bitter taste – so bitter that a tiny bit left an awful taste in my mouth for quite some time afterwards. I wondered if the oil was rancid, I wondered what ingredient could possibly taste so awful.

Then finally, the culprit was revealed – the last ingredient was grated courgettes, and the dish went from lovely to appallingly bitter.

Loathe to throw out a big pan of food, I tried to eat around the courgettes and pick out the broad beans, but I had to admit, it tasted bitter beyond anything I wanted to eat, and eventually gave up. My partner refused to touch it.

I woke up around 3am with stomach cramps, diarrhoea, the same bitter taste in my mouth, and a pounding heart. I was quite worried, and my partner said I should look at the research he had done on bitter courgettes – it turns out they can contain a poison called Cucurbitacin E, which can develop if the plant is hybridised and/or water-stressed. What the research did not reveal though was how serious this was and what the consequences were.

I rang NHS Direct and told her I had poisoned myself with a courgette; she quite clearly thought I was barking, and asked if it was mouldy. I gave up, and rang the out-of-hours doctor and told him my symptoms matched everything for Cucurbitacin E poisoning, and was I going to die from this? He said he’d never heard of it and I’d better go to A and E.

I waited in A and E for several hours, feeling terrible, and eventually saw a doctor who thankfully took me seriously and went to look up this poison. He said I should be fine but should get some tests run in a week or so. I felt pretty ropey for the next few days but the tests were fine and I’m still here to tell the tale. There is a story of someone who died from this poison, though.

Who would have though it of an innocent-looking, usually quite bland courgette?

Update July 2020
Do not eat bitter tasting courgettes!
Fothergills say there is an issue with one of their varieties.
https://www.mr-fothergills.co.uk/Product-Recall-MRF/
However this does not account for all reports and the issue can occur in any variety especially if the plant becomes stressed.