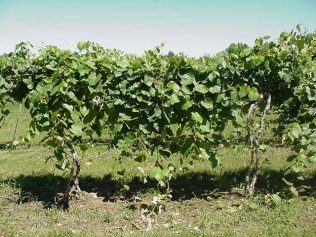 November is the time to prune grapes:

Vines should be pruned once their leaves have fallen and the plants are dormant – if you prune them during the growing season then they will ‘bleed’ or loose sap when they are cut. This is the advice from the Royal Horticultural Society on how to go about it.

The main pruning time is early winter (late November or December). Training and pinching out of new shoots, as well as thinning of fruits, is carried out in spring and summer.

If you are establishing a new grape vine, set up a support system.

Plant the vines during the dormant season from late autumn until late spring (October-March) .Leave 15cm (6in) between the vine and the wall or side of the glasshouse.

After planting, cut back the main stem by two-thirds and cut back any side shoots to one bud. Then follow this advice from the first year:

In the growing season (when the main stem reaches 3m (10ft), or the top of the support):

In the growing season

In the growing season