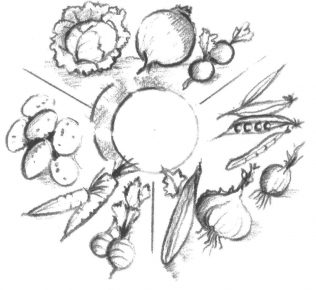 What is Crop Rotation?

The principle of crop rotation is to grow specific groups of vegetables on a different part of the allotment each year. This helps to reduce a build-up of pest and disease problems and it organises groups of crops according to their cultivation needs. Pests and diseases tend to be crop specific – for example carrots don’t suffer from potato blight!  Club root only affects brassicas.

Crop rotation is used in allotment plots and gardens for annual vegetable crops. Perennial vegetables, those that come up every year (such as rhubarb, asparagus and artichokes, both globe and Jerusalem) can remain in the same bed.

Some annual crops such as cucurbits (courgettes, pumpkins, squashes, marrows and cucumbers), French and runner beans, salads (endive, lettuce and chicory) and sweetcorn can be grown wherever there is space, just try and avoid growing them on the same piece of ground year after year.  This is because they don’t tend to suffer from as many serious pests and diseases as brassicas, roots, legumes and potatoes.

Different crops have different nutrient requirements. Changing the plot that you grow crops on each year reduces the chance of particular soil deficiencies developing as the balance of nutrients removed from the soil tends to even out over time. For example; legumes have the ability to fix nitrogen from the air into the soil using nitrogen fixing nodules on their roots, brassicas on the other hand need nitrogen to produce green leafy growth, the part we eat. And so it makes sense to grow brassicas on the plot that was used to grow legumes last year.

Some crops, like potatoes and squashes, with dense foliage or large leaves, suppress weeds, therefore, reducing maintenance and weed problems in following crops.  Onions, on the other hand, are not good at suppressing weeds due to their lack of foliage and so it is a good idea to follow onions on from potatoes.  Why not try the three sisters system, this is a North American idea when you grow squashes on the ground to provide shade and suppress weeds, sweetcorn or sunflowers as a support for pole beans to grow up, this enables you to grow three crops on one plot, in a relatively small space.

Soil pests and diseases tend to attack specific plant families over and over again. This can be a real problem for the commercial grower, just because some of the serious diseases such as clubroot can remain in the soil for up to thirty years! If you rotate your crops this means that pests tend to become less of a problem as the spores or eggs of the pest won’t be able to build up when in the soil.  White onion rot tends to be a real problem on allotments and crop rotation can help to avoid this.

How to do it

If you are new to your allotment divide it into sections of equal size (depending on how much of each crop you want to grow), plus an extra section for perennial crops, such as rhubarb and asparagus.

The following groups should be used in the rotation scheme:

Brassicas : Brussels sprouts, cabbage, cauliflower, kale, kohl-rabi, oriental greens, radish, swede and turnips. (Swedes and turnips are brassicas too – look at the flowers on them and you can see why, many people think they are roots).

Legumes : Pea, broad beans (French and runner beans suffer from fewer soil problems and can be grown wherever there is space).

Potato family : Potato, tomato, (pepper and aubergine suffer from fewer problems and can be grown anywhere in the rotation).

Here is a traditional three year rotation plan where potatoes and brassicas are important crops:

If you have the space you can practise a four-year rotation, this is when potatoes and brassicas are not as important, but more legumes (which take up a lot of space) and onion-type crops are required: